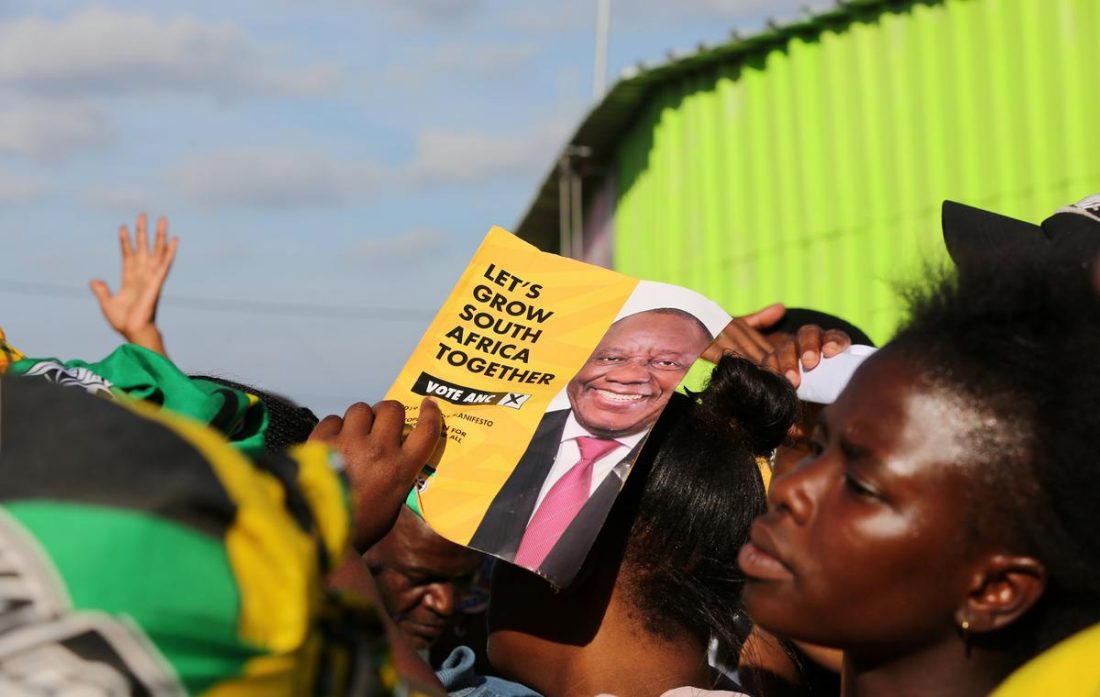 Political commentator and writer, Clyde Ramalaine, unpacks on Voices360 that the ANC’s recent poll claims that state that its president Cyril Ramaphosa is more popular than the organization he leads. The South African Citizens Survey poll in its category of political party affinity and support for quarter 3 of 2018 reflects a decline in support for the ANC and that the proportion of citizens who feel close to the ANC had, at the time, dropped from 38% to 35%.

The ANC recently released the results of an internally sponsored poll on its anticipated elections outcome set for May 8. According to the ANC’s poll, its president Cyril Ramaphosa is more popular than the organisation he leads, the poll results concluded that Ramaphosa has an approval rating of 73% while only 60% of those polled are in support of the ANC.  The National elections history of the ANC since 1994 to 2014 confirms an average of 62%. in national polls.

Throughout the history of polling, there have always been questions around outcomes. We know that polls became a measuring tool to assess public opinion on a specific matter, usually of public nature.  Often the subject of the method for polling is flagged as a key determinant of outcomes. In regard to methods, it is also raised.  Some of the doubts concerns pollsters’ methods. Of these usually advanced are, do they ask the right questions? Are they manipulating the wording of questions to get the responses they want? And whom did they interview?

There is common agreement among researchers that it matters greatly how the pollsters ask their questions. It is very possible, that at times, the respondents may offer opinions on matters, subjects or topics they may not have previously given much thought given the fact that they may not really care about the aforementioned. We also know that those from whom responses are solicited may purely do so from being hospitable since they consider that perhaps they are dutybound to have an opinion on the subjects raised.   This by itself enables sufficient space for what it called a manufactured opinion, particularly on issues narrow that wide concern.

What is known is that the ANC as a political party is not a registered professional polling entity, meaning if it claimed to have conducted its own poll it will be questioned, since the ANC like all political parties in SA simply at an internal level does not preside over the capacity, infrastructure or proven skill to give effect to an objective poll-exercise. In most instances’ organisations may enlist a professional polling entity to do its research.  In that instance, the poll could still be an ANC poll since it commissioned the research.

Equally so if it enlisted a polling company which can safely be assumed in this instance, it can be accepted that it equally briefed the said company, meaning the aims and objectives, methodology, sampling, compiled questions, still stands since the ANC sponsored the poll. Without overtly or maliciously questioning the integrity of the ANC’s enlisted poll, the questions at an objective level remain valid, we are also not sure if the poll had two sets of distinct objectives to separately test the favourability of its president and that of the party in a likely national poll.

The South African Citizens Survey poll in its category of political party affinity and support for the Q3 of 2018 results reflect a decline in the support for the ANC from its high-point (64%) of people who “liked” the party in the previous quarter. The proportion of citizens who feel close to the ANC has dropped from 38% (14-million adults) to 35% (12.9-million adults). By the same token, those who like the ANC dropped from 64% to 58%, while those who prefer the ANC dropped from 47% to 43%.

Let us engage what are the probabilities. It may be that the ANC’s poll, the details of which we have not been privy to, was conducted in the proper sense and, therefore, an honest reflection of the party’s current position. On another score is it possible that the ANC sponsored polls in an outcome which finds itself favoured with 60%, has little to do with research but a very real fear expressed in hope to not fall below the magical 60%. We not clear when 60% became for the ANC the magical threshold, yet it can be surmised that its overall performances in the previous five national elections from the dawn of democracy set it at 62% hence this may have contributed to the conviction of a 60% threshold. Is this the ANC’s way to enter the space of opinion polls with the intention of influencing the next polls?

The second issue relates to its findings that its president, Cyril Ramaphosa, who is the caretaker president of South Africa completing the 5th administration term, has an approval poll rating of 73%. Again, we not sure what method was used, who made up the sampling group, the variance index of the sample groups. We are not sure what constituted the questions and to whom exactly these were raised.  Be that as it may, however, Ramaphosa’s individual support may not automatically translate into ANC votes to either equal its last national ballot of 2014 which delivered 62%.

ANC head of elections, Fikile Mbalula in announcing the ANC poll, said “The people have got to see the president in the image of the ANC, “The two are not disconnected.” He went on to say, “When he [Ramaphosa] acts in government and does good things, people see Ramaphosa, not the ANC, but that is so because of where we come from with an ANC that was associated with badness because of the head of state.”

This statement from Mbalula says more than what meets the eye. On the one hand, he talks of “the people”, we not sure who Mbalula refers to because the term people as used in this instance can mean various things.  The masses that until now have voted for the ANC with an average 62% for the last five national polls are necessarily those that apartheid bestowed an identity marker of ‘African’, and does not include those that apartheid in racial categories labelled ‘Coloureds’, ‘Whites’ and ‘Indians’. We know the latter mentioned groups do not vote for the ANC, they did not even vote for the ANC when Mandela was on the ballot paper, despite all the untested claims.

The ANC’s poll confirms that Ramaphosa’s popularity, in essence, falls outside the ANC. His clarification of who Ramaphosa is in direct relation to the ANC must be seen from that vantage point.  in view of that. Mbalula is in a real sense conceding that those who support Ramaphosa may not vote ANC.   As usual, Mbalula does not miss any chance to take a swipe at the last ballot elected president of SA, Jacob Zuma with whom he recently had a serious fall-out.

The SA Citizens Survey’s in its category of political party leadership performance, for the   3rd Quarter of 2018 found that comparatively-speaking, Ramaphosa ranked as the most popular political party leader polled over the past 12 months. Nonetheless, Q3 of 2018 saw a significant decrease in his favorability rating, dropping by eight percentage points from 64% to 56%.

What we know is that that South African ballots are not presidential elections but necessarily party-elections, meaning we all vote for a party. Meaning the claimed poll popularity of the ANC President may, on one hand, translate to nothing, or it may confront a constituency outside the ANC to go against their own usual party even race convictions and embrace the ANC, whom they have long declared black, corrupt and failing to lead.

On another level, is this the proverbial Rubicon moment for a ‘white’ elite who are more concerned to have the interest of the neo-liberal status quo agenda stand? Those who have unequivocally pinned their last hopes on Ramaphosa as their second coming of a Mandela to be an insurance policy for against blacks who demand economic emancipation.

Let us not forget South Africa is and remains a negotiated settlement in which the elites on both sides of the proverbial railway line of race benefitted. That agreement warrants a mild and controlled ANC definitely not the radical pro-poor agenda stance based it adopted in the second term of its last ballot endorsed president, Zuma.  Is there a deal, to have Ramaphosa in power that will ensure a tamed and malleable ANC?  We know we have entered the world of coalition politics in SA for a number of years.

We know the ANC’s major internal war is hardly a conflict on corruption in which there are ‘‘angels’ and ‘demons’, where some despite their own allegations protest being clean and working for the cleaning up of the ANC and SA government. I still advance the ANC ’s greatest contestation is in its identity, where it is trapped between the demand of a   pro-poor agenda and it’s from inception elongated history of primarily an elitist interest.

Let us also not forget the ANC was always ready to make a deal, whether it was to engage the 1910 British State or the 1948 Apartheid State which resulted in the negotiated settlement where the ANC was outfoxed by a wily and savvy National Party white interest leadership.The ANC is and has remained in power by those who constitute the poor. The dichotomy it finds itself in is its utter-dependence on the black poor, we saw it again now with its house visitations, the gatherings always evidence this reality of an elitist movement who in 2019 remains in power politically because of the poor.

It is against this backdrop of the black poor- constituency that we must ask, what percentage of those polled constituted the poor who in SA remains racially defined as the black poor? What are the implications if the ANC is less popular than its president, particularly among a non-ANC voting constituency? Is it believed that Ramaphosa’s poll popularity will translate to ANC votes from the same constituencies? If so why?  How much of this has to do with the usual public relations that have come to define Ramaphosa?